The rehearsals have rushed by like a runaway train charging towards the station of ‘Performances ‘and it feels like I was hurtling along with it and now have emerged blinking outside the station going ‘Oh! This is where I am!?’

Reflecting back a week after we presented the show it feels slightly like we have unfinished business. The making process of devised theatre means that the narrative of the show is often completed in the imaginations of the audience. You learn so much about how the show is structured and its dynamics by watching an audience experience it – particularly an audience of children. This is why in other styles of theatre you have previews to test the work in front of a live audience. We shared the show four times last weekend and developed it each time but by the final performance it felt like things were really starting to emerge (for me and the actors) that were showing up the real potential and the gaps in the story. I wanted to get straight back at it the following Monday morning.

For the full blog click 'read the whole story' by the title.

We had probably found the structure of the show (through improvising, research and playing) by the end of the first week – 3 friends on an adventure, each with 2 major moments of anxiety and a sense of how the show started and ended. This is like DRAFT 1.  At this stage of the ‘play’ you may share it with your colleagues and friends and receive feedback on its structure and character arcs. This journey of dramaturgy on a new play happens in offices, cafes and over months, sometimes years. In our process it happens live, in the room and over week 2 – this is the editing and testing period.  This becomes DRAFT 2 by the end of the second week. At this stage the traditional new play may start their rehearsal period where ours seems just to be ending (!)…. So into Week 3 and we make it all work in the theatre- adding lighting, the right sound, the final props. And suddenly we have reached the station – the performances.

There is a joy of this by-the-seat-of-our-pants making process. You genuinely offer something up that feels fresh, newly baked and get an instant feedback. The work is so close (in terms of time) to the moment it was created that the actors are still discovering new things right in front of the audiences eyes. It also allows the audience to have an authorial role – they can insert their imaginations into the gaps and for young audiences these imaginations are rich and ready.  I love listening and talking to the audience about what their imaginations conjured, what images meant to them and where the story wobbled.

So onto the next period… Reflection, re-rehearsal and touring in 2018. 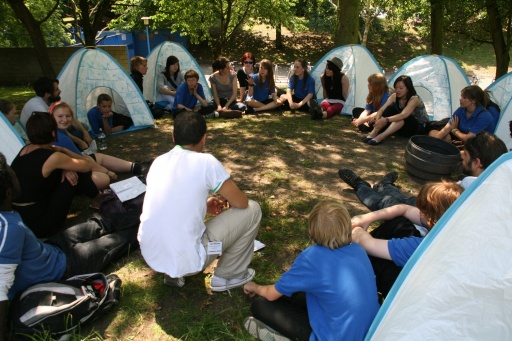